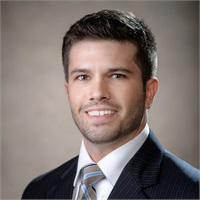 Mike Cullinane has been a resident of McPherson, Kansas since 2008. He grew up in the small rural Kansas town of Peabody, and always appreciated what small town living had to offer. After graduating from Peabody-Burns High School, he studied at the University of Kansas in Lawrence. While in business school, he met a young lady named Abby (formerly Schrag), who was a native of McPherson, Kansas. After Mike and Abby finished college, they married and moved back to McPherson to start their careers and a family.

Mike has been in the financial services industry since 2005. His career started in banking during college, which then led to financial advising. It was then, that he realized his passion was listening to people and helping them develop and implement a plan to reach their financial goals. Mike worked primarily in Trust and Wealth Management departments from 2010-2015. During this time, he strengthened his skills, knowledge and abilities in the investments arena and he also learned the importance of estate and financial planning. Mike is a registered as an Investment Adviser Representative (IAR). He holds a series 7, series 66, and Life and Health Insurance licenses.

Mike and Abby live just west of McPherson, Kansas. They have three children, Meg, Maddox and Merrit, and a spoiled hunting dog named Gus. Abby is a registered nurse and works as a school nurse for USD 444 in Little River, Kansas. Mike enjoys hunting, the outdoors and most sports. He also volunteers on the executive committee of Pheasants Forever and serves as treasurer of the Jackson Township board in McPherson County.